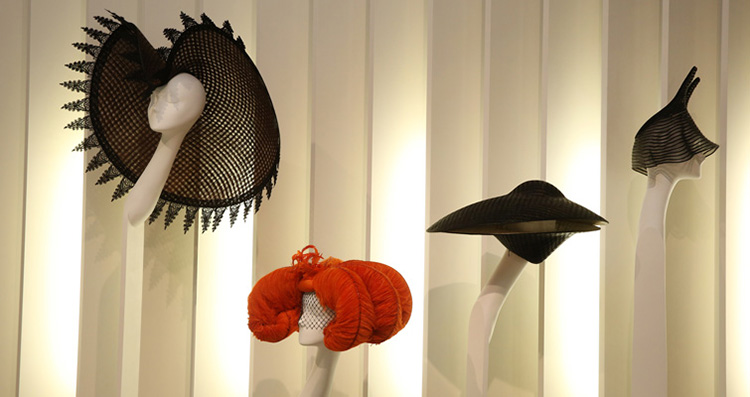 The grandeur of Somerset House is a fitting backdrop for Fashion Galore! an exhibition celebrating the life and sartorial savvy of Isabella Blow, a fashion pioneer who championed the work of young British designers. Because the designers she ‘found’ – including Alexander McQueen and Philip Treacy – went on to enjoy international acclaim, this is much an exhibition about them, their success is inextricably bound up in her legacy.

‘Fashion’ doesn’t come close to encapsulating Blow; style is probably better. She had that by the bag load – but her outlandish, fantastical and fearless outfits never wore her, she always wore them; usually confidently, with casual abandon. She wore them everyday too, as the scuffed shoe heels and lipstick-marked collars of some of the garments on display prove. Blow may have loved beautiful, well-crafted clothes and accessories, but she loved wearing them more.  And, unlike many of today’s fashion bloggers, she didn’t wear them to be photographed (although she was); she wore them because she believed.

The exhibition opens with a collection of family photos that document Blow’s earliest years. Born Isabella Delves Broughton, she came from a line of English aristocracy – her grandfather was Jock Delves Broughton – although, growing up, the scandals that saw him lose the family fortune meant Blow was forced to live in a cottage in the grounds of Doddington Hall, the family’s ancestral seat. It seems obvious to say, but Blow’s early life set the tone for may of her later interests – quintessentially English combined with an aristocratic disregard for money.

Of course, Blow’s talent was talent – spotting talent. She ‘discovered’ models Sophie Dahl and Stella Tennant, hat designer Philip Treacy and bought all of Alexander McQueen’s MA collection – although she couldn’t afford to pay for it outright so she gave the designer £100 a week. The designer’s first full collection (Dante, Autumn/Winter 1996) catapulted him onto the international fashion stage and publications including the New York Times honed in on an exciting new wave of London design talent. Most of that talent could be traced back to Blow.

Her vision was validated when McQueen was appointed head of Givenchy, but his ascent marked an increasingly fractious relationship. The exhibition doesn’t really explore this area, instead (and perhaps rightly) choosing to focus on Blow’s creative output, her style and the other designers she championed. A wonderful memo breaks down the expenses she incurred on a fashion shoot, alongside a harried accountant’s plea for more (any!) receipts. Blow didn’t trouble herself with the mundane, she lived for the fantastical and the flamboyant; finding an outlet in fashion shoots for magazines including the Sunday Times Style, Tatler and Vogue.

But despite all the fashion, Blow’s warmth comes through. Her mismatched shoes, worn down lipstick and well-thumbed spiral Filofax say more than the clothes she wore – no matter how artfully she curated them. Towards the end of her life (Blow committed suicide in 2007, following a long battle with depression), she felt that the designers she had nurtured had left her behind. Was her contribution to British fashion overlooked? It probably was. But this exhibition gives Blow the space – and place she deserves.

Further reading: Tribute to a supreme fashion fantasist / Blow by Blow: the story of Isabella Blow

Isabella Blow: Fashion Galore! is at Somerset House until 2 March 2014.