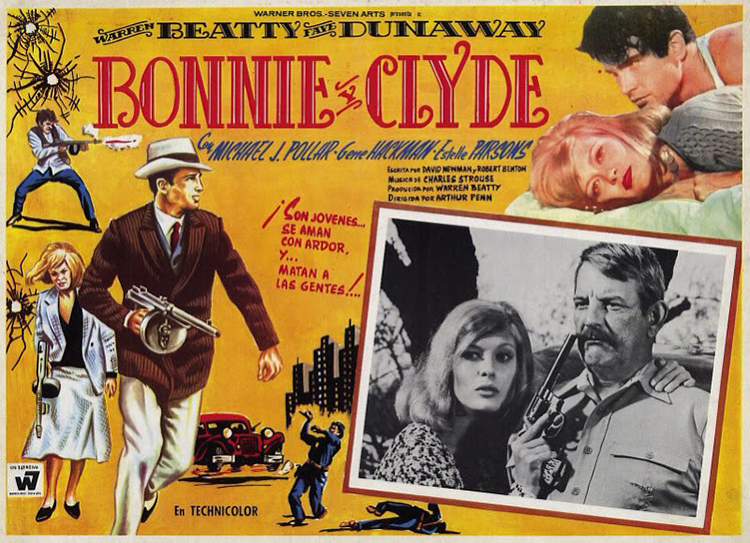 1967. It was a stellar year for film, and it’s being celebrated with a blogathon hosted by the wondrous Rosebud Cinema and Silver Screenings. Catch up all the entries over here: how many have you seen?

Bonnie and Clyde can be whatever you want them to be: glamorous, cold-hearted, callous, likeable, cruel, desperate or (in Arthur Penn’s film adaptation) devastatingly stylish. Maybe the real-life Depression era duo shared none or all of these attributes, but that doesn’t matter – this is how the duo live on in popular consciousness. Although Penn’s Bonnie and Clyde divided opinion on its release in 1967 – critics were particularly concerned about the ‘realism’ of the violence and ‘historical inaccuracies’ – it cemented the notoriety of two gun-toting nobodies who killed people and robbed banks. The film resonated with the young movie-going public, conditioned by violent images from the Vietnam War that were broadcast on the nightly news and splashed across the front of newspapers. Their tastes had changed, and this film, with its New Wave influences and disregard for Production Code conventions, ticked all the right boxes. As Pauline Kauel concluded in her influential review for The New Yorker, perhaps audiences were drawn to Bonnie and Clyde because ‘…making us care about the robber lovers, has put the sting back into death’. In short, we’re like them, but we don’t want to. As characters, Bonnie and Clyde are a paradox.

Of course, Penn’s film isn’t just about controversial characters. His slow-motion photography and quick-cut editing were revolutionary at the time, and emphasised the dramatic getaways and the moments of violence. Shot in location in Texas, the film is visually rich, rendered in a dusty palette of dusty yellows, greens and blues; a romanticised and nostalgic nod to the 1930s and an effective device that places Bonnie and Clyde firmly in the ‘real’ world. Warren Beatty and Faye Dunaway have a wonderful on-screen chemistry, and parts of the film read almost like a classic love story in the vein of It Happened One Night. Interestingly, Dunaway wasn’t Beatty’s first choice, and several other actresses were considered, including Natalie Wood, Jane Fonda, and Carol Lynley. As co-producer (he was looking to kickstart his career following several poorly-received films), Beatty had more say than was usual, and production was often held up as the actor and director argued about scenes and dialogue.

Theadora Van Runkle’s costumes also helped to amp up the nostalgia. Although the film took longer to garner praise (and revenue) her costumes were an almost overnight hit, with copies of Bonnie’s garments available to purchase in department stores. Whilst the American public were unwilling to endorse violence, they were willing to dress the part – and that included jaunty berets, ballet flats, neckties and mid-length skirts. According to Van Runkle, the success of the ‘Bonnie and Clyde look’ was that they wore mix-and match ensembles, ‘clothes people could wear to work and in their real lives’. The costumes have an easy familiarity – the 1930s viewed through the lens of the 60s. Dunaway is probably sexier and more alluring that her real-life counterpart (some scenes captured the attention of the censors, who were convinced Dunaway’s breasts were visible through one flimsy vest) but she originally envisaged the look as very different:

‘I thought jeans, maybe, pants of some sort since they were robbing banks and making quick getaways. But Warren and Arthur wanted to put her in dresses, great costumes that would give her style…the look for Bonnie was smack out of the thirties, but glamorised and very beautiful…’ 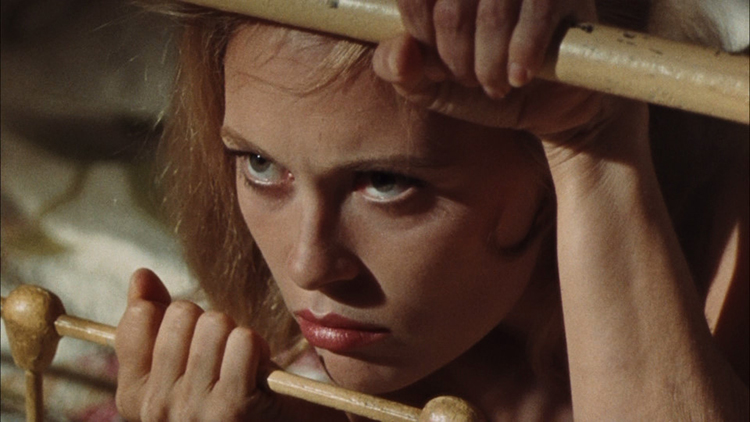 Jeans do seem like an obvious choice, not only for practicality but because Bonnie resembled independence – something women in the 60s, keen to take control of careers and relationships, were likely to appreciate. Very few films before Bonnie and Clyde had explored femininity within the gangster genre; Bonnie sits somewhere between 1930s ideals and 1960s-borrowed radicalism. Many of Bonnie’s character traits feel very contemporary – she’s aware of her sexuality, craves a life of adventure and independence, and gets turned on by violence. Whilst Bonnie is presented as a sexual object from the start – the opening shots pans her lips and naked body – she’s never a ‘sex object’. Clyde, who claims ‘I ain’t no lover boy’, is overwhelmed and dazzled by her sexual advances and when he’s unable to perform she channels her unrequited passion into crime. To retain sympathy for her character, the audience needed visual reminders of her femininity – and that’s where Van Runkle’s trouser-free wardrobe is essential. 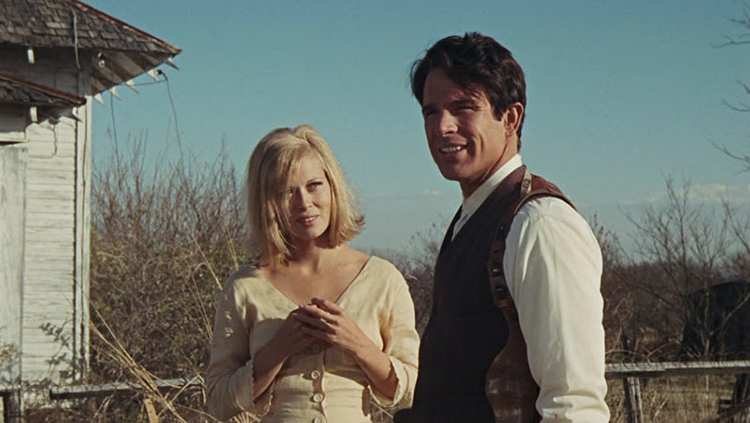 In the opening scene, Bonnie wears a loose, crumpled button-down dress and flat ballet shoes. The soft peach colour softens her sexuality and makes her seem unthreatening. Cut on the bias, it’s loose and flattering; although it’s threadbare status reinforces her poverty. Van Runkle scoured vintage shops for individual pieces; their pre-loved status suited the travelling wardrobe she was trying to create. During production, Van Runkle met Edith Head who advised her use flowered chiffons to recreate a 1930s vibe. But the designer remained unconvinced, and chose instead to rely on her own research which suggested that once Bonnie and Clyde began to earn money from bank robbing they began to shop at more ‘upmarket’ establishments – including the Marshall and Fields catalogue.

Bonnie’s clothes become more tailored as finds confidence in her new life and embraces a life of (successful) crime. One of the most recognisable shots of the film (and a recreation of an actual photograph) is when Bonnie poses on Buck Burrows’ (Gene Hackman) car, cigar clamped firmly between her lips and gun resting comfortably at her hip. She’s wearing a fitted black jacket and a full skirt – so far, so business-like. But tucked into the skirt is a cream silk blouse with an embroidered yoke detail. Even once Bonnie has fully embraced her new persona there’s a visual link back to the small-town girl with the big dreams that the audience met at the start.

The final component of that look is the beret. The beret emphasises Bonnie’s sex appeal and gives her the confidence she needs to be an outlaw – a sartorial signature that tells everyone exactly who she is. According to Van Runkle: ‘the beret was the final culmination of the silhouette. In it, she combined all the visual elements of elegance and chic’. Berets were popular amongst movie stars (including Garbo) in the 1930s, but they had mostly fallen out of fashion by the 60s. So successful was Bonnie’s look that the accessory made a comeback following the film’s release and beret production in the French town of Lourdes reportedly shot up from 5,000 to 12,000 per week. Neckties also saw a surge in popularity, and skirts were lengthened to mimic Bonnie’s style. 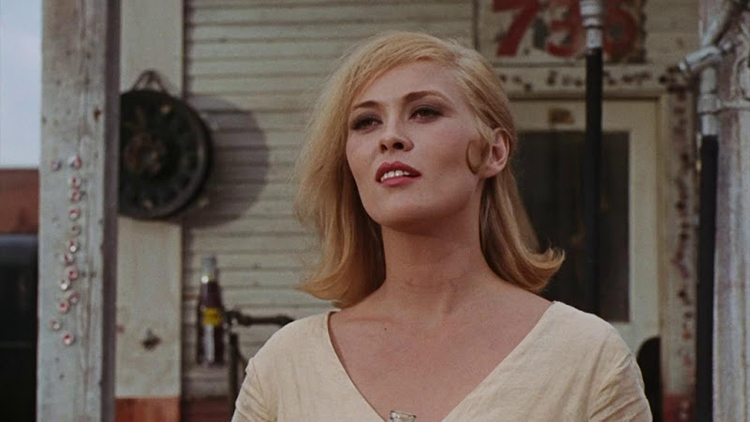 Of course, the influence of Bonnie and Clyde stretches far beyond beret production. Today, the film stands as a pop-culture landmark and its influence resonates in everything from Sonny’s bullet-ridden Godfather death to Thelma and Louise. It’s hard to gauge how radical and how fresh it must’ve seemed to audiences in 1967, but the fact that its broader themes still seem fresh and relevant indicate its differentiation from the norm and how far removed American cinema had been from contemporary values.

Further reading: Hollywood, Nihilism and the Youth Culture of the Sixties: Bonnie and Clyde by Lawrence Murray / Blasts from the Past by Patrick Goldstein / Arthur Penn: cerebral subversive by Peter Biskind