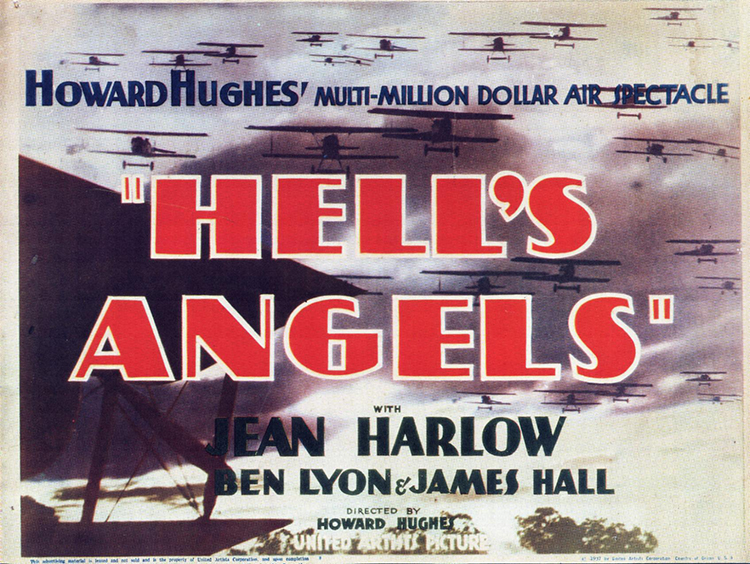 This post is my contribution to the World War One is Classic Film blogathon, hosted by the fabulous Silent-ology and Movies Silently.

The story behind Hell’s Angels (1930), Howard Hughes’ long-in-the-making WWI epic, is almost more interesting than the film itself. It cost more than $4,000,000 to produce (making it the most expensive film of its time) and was almost entirely reshot – the original silent version was shelved because, just as it was ready for release, sound took over Hollywood. Every aspect of the film is epic – from the number of extras (reportedly more than 20,000) to the air battle scenes. Hughes, all-consumed by notions of authenticity and realism, purchased more than forty warplanes to use, in the process becoming the proprietor of the largest privately-owned military aircraft fleet in the world. He used his flying experience to choreograph the fight scenes and even piloted the plane during one particularly dangerous manoeuvre, after Paul Mantz (the film’s principal stunt pilot) refused to participate. Hughes was rewarded with a skull fracture (and facial surgery) for his efforts but must’ve considered himself lucky: four airmen lost their lives in connection with the film. 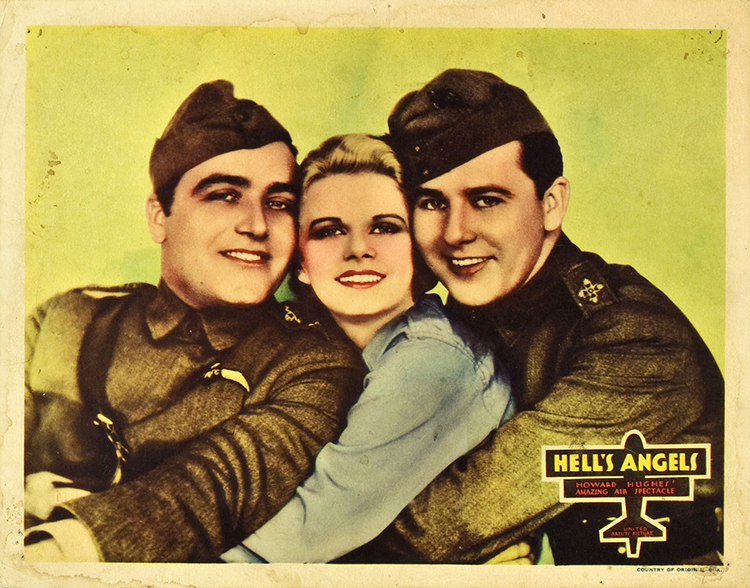 In contemporary cinema, the ‘epic’ moniker is overused and misplaced, thrown at summer blockbusters and star director-led movies. But Hughes understood the potential power and meaning of cinematic ‘epics’, and was determined to produce a war film that showed off his filmmaking credentials but also left moviegoing audiences in awe. In some instances he succeeded. Even to the modern eye, the war scenes are spectacular – especially those in the German-controlled Zeppelin and the dog fighting scenes. But in many others ways, he failed. Hughes was too close to the project to recognise its flaws; a labour of love, the movie was so much a part of him that any criticism was likely taken as a personal affront. Many of the early scenes are short, awkward and superfluous, and much of the acting is stilted and wooden.

The plot is almost secondary and tangential, and certainly doesn’t win any prizes for originality. Following the outbreak of WWI, two brothers (played James Hall and Ben Lyon) with very different temperaments abandon their studies at Oxford and enlist in the Royal Flying Corps (RFC). Sensible brother Ray (Hall) is besotted with the promiscuous socialite Helen (Jean Harlow) who enjoys a fling with his sibling Monte (Lyon) and several other officers. Before the two leave for a dangerous ‘suicide mission’ over Germany, Ray discovers Helen in the arms of another man, only for her to reveal she never loved him. During the mission, the brothers plane is shot down, and the duo are captured by a German commander (Lucien Prival) who’d previously been cuckolded by Monte. He offers them freedom – if they’ll reveal the details of the next British air attack. 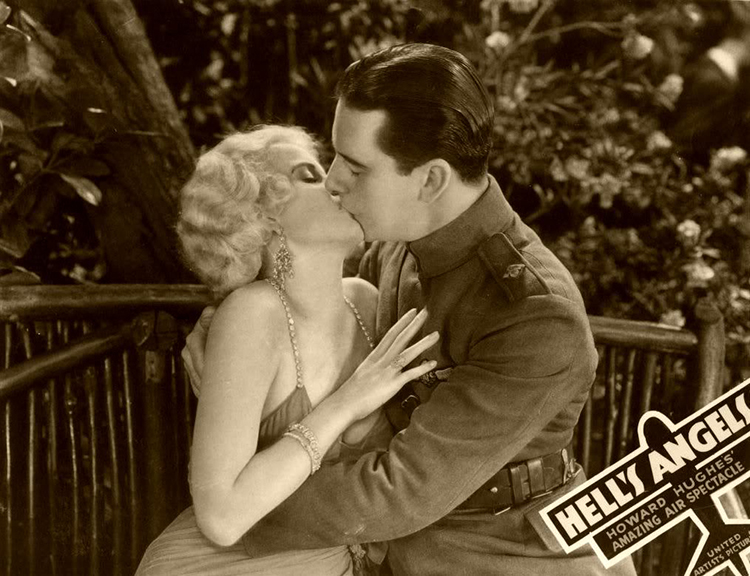 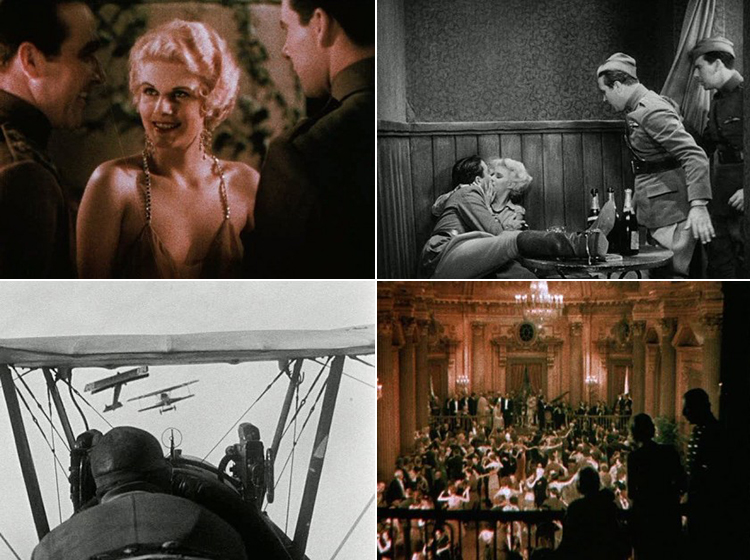 Hell’s Angels was Jean Harlow’s breakout role, and is the only colour footage that exists of the star. Harlow replaced Greta Nissen, the original female lead, whom Hughes felt wasn’t fit for a ‘talkie’ version; reportedly Hughes decided on Harlow after being introduced to her by leading man Ben Lyon, who picked the actress out of a group of dancers who were performing at a nearby sound stage. Although Harlow had previously had a handful of uncredited roles she was by no means an experienced actress, and co-director James Whale struggled to get a polished performance – in many of the shots Harlow gazes at the camera and, for a film set in England, her accent is remarkably American (although she’s not the only character guilty of this). In some ways Harlow’s inexperience allowed her to deliver some lines guilelessly, including the famous ‘would you be shocked if I put on something more comfortable?’. She was clearly comfortable portraying an openly promiscuous character (remember, Hell’s Angels is Pre-Code) who returns the male gaze with a bold and direct stare yet brings an joyous energy to some of the films quieter scenes. In terms of characterisation, Harlow’s Helen is ahead of her time: she’s willing to use the war to get ahead, and is quick to take advantage of the situation to behave like a man in peace-time. Her predatory and vampish traits are undercut by her angelic face and halo of blonde hair – surely someone so beautiful could never sin? 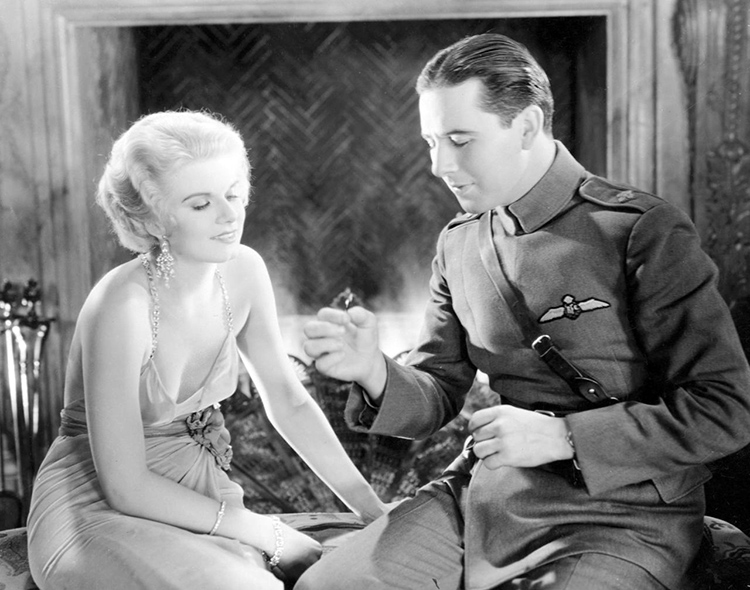 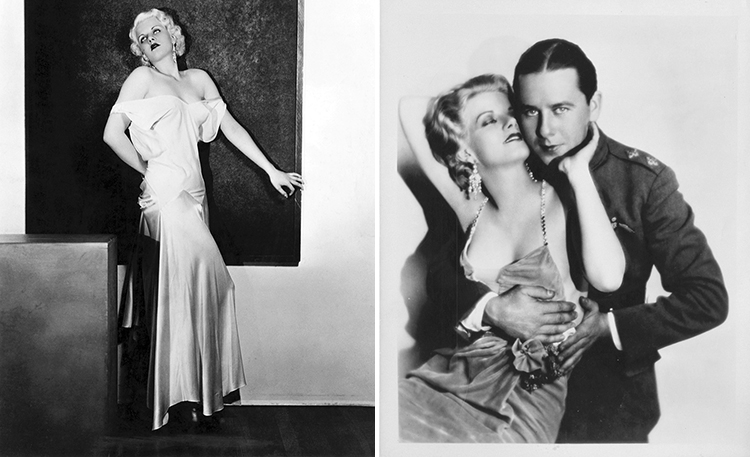 Harlow contributes to the eccentric energy that pervades much of the movie. Hughes was essentially an independent, self-financed filmmaker who was working in a fledgling industry; templates for talkies were yet to be established, allowing Hughes to follow his own creative vision – maybe not always successfully, but it was this early experimentation that shaped future tropes and ideas. Aged just 22 when production began in 1927, Hughes was young, confident and determined to do filmmaking his way. There’s a sense that Hughes is trying to prove something to himself and to Hollywood – Hell’s Angels is a lavish, no-expense-spared production that was the best it could be. And whilst it’s easy to dismiss the human elements – mostly because they’re the worst part – props to Hughes for attempting to create a film that blends action and bravado with quieter reflection. But this decision was almost the film’s downfall: by focusing on both the individual and the overreaching social experience of war, Hughes took on too much and, as a result, the film is a complex muddle of the personal and the universal. The small and intimate vignettes that punctuate the ‘action’ (Germans drinking and eating, students enjoying ‘high jinks’ at Oxford) add depth and contrast, but seem out of place and interrupt the pace of the film. 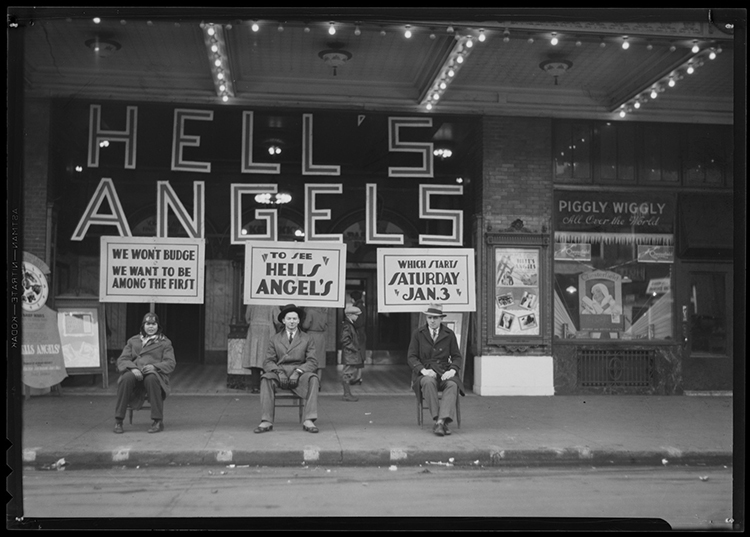 Hell’s Angels wasn’t an immediate box office success, and critical reaction was lukewarm. Enthused by the aerial scenes, film critics were less impressed by the plot and the acting. Morduant Hall at the New York Times was particularly dismissive: ‘In every instance so soon as the producer forgets Helen, the flaxen-haired creature, and takes to the war, his film is absorbing and exciting.’ Despite this, the film went on to earn more than double its production cost. Whilst that must’ve been vindication for Hughes, it’s likely that box office receipts and revenue were of little consequence. He was wealthy enough to make films to the sake of it, and the creative process (along with the chance to invest in and be at the forefront of) technological innovation was his motivation.

28 thoughts on “Hell’s Angels: the perils of plot vs. action”