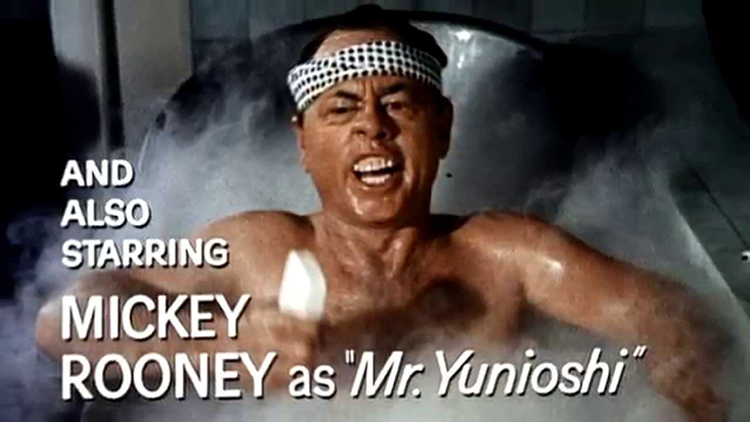 This post is my contribution to the month-long getTV Mickey Rooney blogathon, hosted by a fabulous trio of bloggers: Once Upon a Screen, Outspoken and Freckled and Paula’s Cinema Club. See the full list of entries here, and don’t forget to visit the getTV schedule for details on Rooney screenings throughout the month.

When Mickey Rooney died in April this year, one film was notably absent from the obituaries that charted his colourful and varied life. Its omission wasn’t due to a lack of visibility – in fact, it’s quite the opposite – but the role in question remains one of Rooney’s most contentious. Despite all the highlights in the actor’s rich and varied career, one role cast (and continues to cast) a long shadow: his turn as Mr. Yunioshi in the Blake Edwards-directed, 1961 classic Breakfast at Tiffany’s. It might be the film that inspired a thousand Pinterest boards, seasonal fashion editorials and set a benchmark for a certain kind of romance, but there’s a darker side to the movie that is less regularly referenced.

Since the film’s release Rooney’s politically incorrect performance – complete with taped back eyelids, distinctive buckteeth and overly stereotypical accent – is often cited as one of the worst examples of Hollywood racism. The classic symbol of so-called ‘yellowface’ was no doubt inspired by the actor’s early vaudeville days but, thanks to the permanence of film, it’s a stereotype that is still talked about today. Cartoonish and borderline pervy, Mr. Yunioshi has seemingly no redeeming traits, and it’s impossible to ignore performance, so out of step is it with an otherwise commendable romantic comedy. Indeed, so deep does the opposition run that the role continues to generate protest and upset. In 2011, a Bronx resident launched a petition against Brooklyn Bridge Park’s decision to screen the movie – just one in a string of outcries surrounding Rooney’s role. Paramount, the studio behind Breakfast at Tiffany’s, acknowledged the depth of feeling and included a short documentary entitled Mr. Yunioshi: An Asian Perspective in the 50th anniversary DVD release.

Perhaps the actor just played as he was asked – Edwards was looking for a comic element, and Mr. Yunioshi provided it. On the one hand, the role can be seen as some lightweight slapstick, some easy humour, but in viewed through the lens of social progression, it’s undeniably racist. After spending more than forty years defending the role, Rooney finally admitted that he had some regrets, stating in a 2008 interview with the Sacramento Bee that: “I wouldn’t offend any person, be they black, Asian or whatever… It breaks my heart. Blake Edwards… wanted me to do it because he was a comedy director. They hired me to do this overboard, and we had fun doing it.” Previously, in a 45th anniversary edition of Tiffany’s, Edwards had also expressed remorse: “Looking back, I wish I had never done it… and I would give anything to be able to recast it, but it’s there”.

Rooney and Edwards probably didn’t set out to create contention, and a 1960s audience would surely have had a different reading – in fact, the New York Times review labelled Rooney’s role as ‘broadly exotic’. The movie is a product of its time, and the ‘Mr. Yunioshi’ character was probably already familiar to moviegoers as it harks back to WWII-era anti-Japanese propaganda cartoons. At least those characters were stereotyped with an aim, but 1960s (peacetime) Hollywood can claim no excuse other than ingrained racism. Tiffany’s isn’t the only example of ‘yellowface’ practice, but the film’s iconic status ensures that it’s one of the most discussed. It’s so much more than a ‘bit of fun’ because it’s roles such as this that perpetuated, validated and reinforced stereotypes that would take generations to dissipate. For a 1960s audience, conditioned to view Asians as villains, an enemy to be distrusted and overcome, the role might not have seemed a stretch, but it continued to foster an unrealistic characterisations of an entire race. It’s one thing to be under-represented or stereotyped, but to be deliberately misrepresented? That’s another question entirely and it’s the misrepresentation that makes the role particularly problematic. One suspects that an Asian actor playing the same slapstick role would’ve met with less criticism.

To Rooney and Edwards’ credit, they didn’t know they were making a film that would take a major role in classic Hollywood. If they had, they would undoubtedly have thought beyond the lazy characterisation and perhaps opted for a role that was closer to Truman Capote’s original, a creative artist with an eccentric edge. But of course, Breakfast at Tiffany’s was adopted into American culture and is a much-beloved global export, creating an entire global audience that’s meant to overlook (or at least put up with) ‘yellowface’. But is the act of watching condoning racism? Or is it about accepting that the film comes from another era and was made with an entirely set of ethical codes? In the short term, Rooney’s Mr. Yunioshi probably was a damaging stereotype that perpetuated WWII mythology, but in the long term it’s a reminder of how far Hollywood has come and how much still needs to be changed. Indeed, almost three decades later, Rooney’s character was used as an example of blatant anti-Asian racism in the 1991 film Dragon: The Bruce Lee Story, used to foreshadow the racism Lee himself would face in Hollywood. By no means is Rooney’s role one to be celebrated, but it should be remembered and learnt from and, perhaps for that reason alone, it remains one his most important.

Further reading: ‘A Certain Slant’: A brief history of Yellowface in Hollywood by Bright Lights Film Journal / The Mickey Rooney role nobody wants to talk too much about by WSJ / Asian images in film introduction by TCM