Within the context of feminism, Bond girls represent something of a conundrum. On the one hand, any female character that exists to ‘romance’ the hero and tumble into bed on a whim is clearly anti-feminist but, if the franchise is regarded as a whole, there’s a clear evolution of the ‘girl’ that runs parallel to changing attitudes to gender. Consider that the earliest films pitch Bond as a serial seducer – there’s a direct link between his masculinity and sexual conquest, a bedroom success often marks the tipping point in a storyline. Although functioning as pure objects of pleasure, some of the early Bond girls can be considered to exist outside social norms, many rejecting (and liberated from) traditions such as family and marriage – although of course, they remain a façade, a 2D character that’s written purely to submit to the needs of a male.

In the 1960s – and in line with changing attitudes from and towards women – Bond girls evolved. Consider: in From Russia With Love (1963), German actress Lotte Lenya despatched her prey with a poison-tipped shoe; in Thunderball (1965) villainous Luciana Paluzzi refuses to be seduced into ‘good’ behaviour. But these independent agents who (on some level) embraced their sexual desires were short-lived, and in the 1970s Bond offerings, women were given much smaller, less deviant roles. Perhaps the so-called backlash against the second-wave feminism movement scared Bond’s producers, or perhaps they thought the public wasn’t ready for a true female counter-part. Whatever the reasons, it wasn’t until the 1980s that the character began to develop again, in the form of the powerful Grace Jones, playing May Day in A View To A Kill (1985).

Jones is the high point in a mishmash of mediocrity. Roger Moore – in his final Bond role – was 57 years old and it showed, the plot was particularly farcical and even Christopher Walken couldn’t salvage the film; his turn as baddie Max Zorin was particularly unconvincing. Although critics noted that Jones was ‘badly wasted’ by director John Glen and screenwriters Michael Wilson and Richard Maibaum, she featured heavily in the film’s promo, standing back to back with Bond under the tagline: ‘Has James Bond finally met his match?’ The short answer is yes. Jones threatened Bond’s masculinity and was – without doubt – one of the physically strongest characters. In her opening scene she tames a runaway horse, prompting Q to remark: ‘She must take a lot of vitamins’. Patronising, but compared to Miss Moneypenny (Lois Maxwell) and Stacey Sutton (Tanya Roberts) she is hyper-masculine yet androgynous and dangerously sexual: an unknown entity in a man’s world.

May Day is a difficult character to read. Although she pays the ultimate sacrifice for her perceived villainy, the much-anticipated showdown with Bond is avoided, perhaps because she would have to defeat him and – in the process – would surely destroy the title character and everything it stood for. The fact that she doesn’t die at the hands of Bond and is simply another pawn in Zorin’s master plan turns her into a hero – however justifiable, this reversal weakens the overall position of her character and undermines all her perceived strengths.

But what are those strengths? The May Day character traded on Jones’ ‘action woman’ image cultivated on stage, through her music and her previous screen credits, which included Zula, a powerful warrior in Conan the Destroyer (1984). Her fans and moviegoers would have considerable expectations of her Bond character, and in this sense Glen doesn’t disappoint: amoral, oversexed, borderline sadist, strong-minded, apparent mistress of her own destiny. As a villain, she’s expected to die, but her punishment is less about retribution for her violent and sexual exploits, rather a punishment for guilt-by-association.

Empowered and enigmatic, May Day is a physical challenge for Bond. Everything about her is different and unexpected – from her strong, sculpted, androgynous body, to her minimal, body-skimming outfits – and Bond plays her the only way he knows how – in the bedroom of course. Rendered almost comical by the significant age gap the sexual encounter is encouraged and invalidated by Zorin. May Day doesn’t sleep with Bond because he’s irresistible, rather because her boyfriend/mentor/employer (take your pick!) commands it. 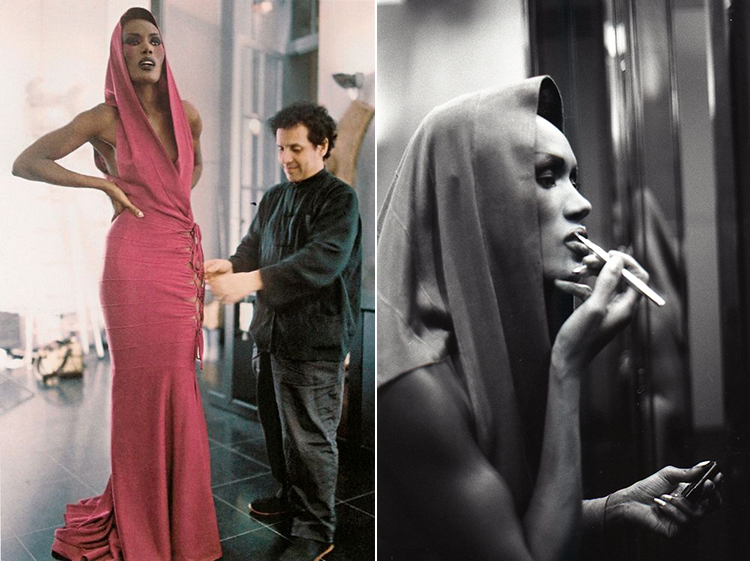 Much of May Day’s appeal comes from the emphasis on her racial and ethnic difference. Although her attire is drawn Jones’ real-life persona (in fact, most of May Day’s costumes were created by fashion designer Azzedine Alaïa) they mark her out as a strong sexual predator who flashes her flesh with casual disregard for her surrounds. In that opening scene at the races, she is a bright vivid spot of red in a sea of tweed suits and pastel-hued dresses, in a later scene her version of a cocktail dress comprises of a slinky jersey dress with defined shoulders, a skirt slit and a draped hood lined with a vivid red fabric. Those sartorial motifs are repeated throughout, with the addition of masculine suiting and leather biker jackets that reinforce May Day’s sexual appeal: neither gender nor convention restricts her self-exploration or expression. Labelling the Bond franchise as feminist is a stretch, but May Day’s position within it certainly opens the way for a gender discussion that sits apart from the male hero narrative. Both a symbol of individuality, liberal sexuality and female empowerment she challenges Bond to re-think his own stereotypes. It might not go much beyond that as, by the end of the film he’s already ‘back in the saddle’, but when considered within the context of a globally popular, on-going series it’s a win. Of course, much of the dialogue was opened simply by the decision to cast Jones, a woman who was never going to fade into the background – the character actually shows little development from the pop culture icon most moviegoers would’ve been familiar with.

May Day might well have been the only female villain from the 1980s Bond films, but her character precedes much of the discourse that would be adopted by third wave feminists (notably the move towards individuality). As a black actor, Grace Jones highlights racial and cultural differences, but she also exists outside popular notions of gender and power that defined – and continue to define – popular perceptions of women. In a make-believe world, where ideas about good and evil are often so clearly defined, she sits somewhere between the two, an ambiguous problem for Bond and audiences.

This post was originally posted as part of MovieRob’s 007 December. Thanks Rob!

Further reading: Negotiating Shifts in Feminism: The ‘Bad’ Girls of James Bond by Lisa Funnell / Licence to Thrill: A cultural history of the James Bond films by James Chapman

Stills via B+ Movie Blog

71 thoughts on “A View To A Kill: Bond finally meets his match”