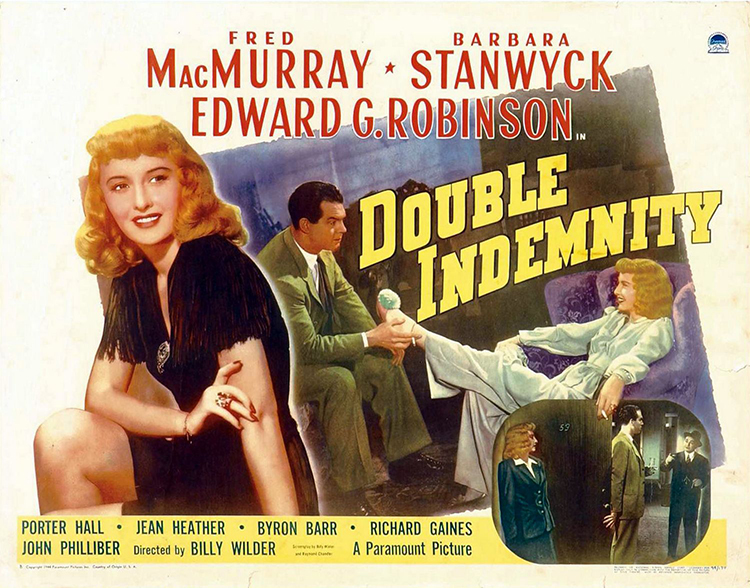 Is Barbara Stanwyck’s Phyllis Dietrichson (Double Indemnity, 1944) the greatest female character to ever grace the silver screen? The short, seemingly obvious, answer is yes: scheming, persuasive and intelligent, she’s fully rounded, complex and convincing – in part thanks to Stanwyck’s performance, but also due to director Billy Wilder’s vision for the movie. Accepting the role was a bold move; Stanwyck was then one of the highest paid actresses in Hollywood, a status she’d attained through classic heroine roles. When she questioned Billy Wilder’s casting logic, the crafty director asked: “Well, are you a mouse or an actress?” 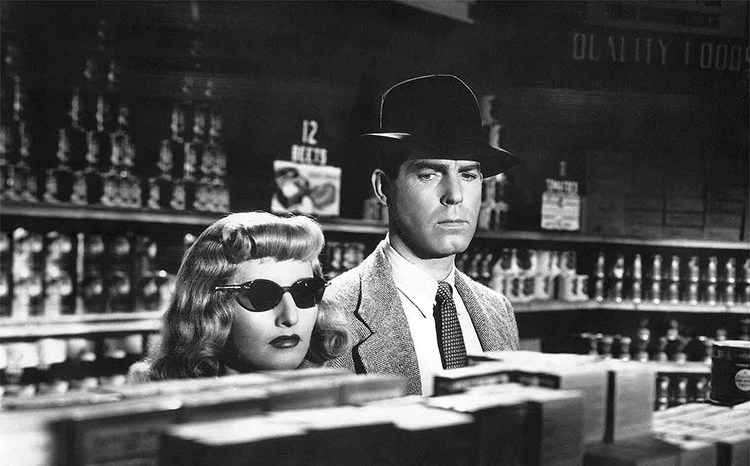 It wasn’t just Stanwyck that needed convincing. Many actors were apprehensive about taking the opposite lead role – not because the material was bad, but because the film explored new and challenging ideas: chiefly the means, motive and opportunity for murder. Wilder, along with screenwriter Raymond Chandler, adapted the screenplay from a novella by James M. Cain (also responsible for The Postman Always Rings Twice). Cain’s original text was inspired by a 1927 murder, in which married New York woman Ruth Snyder persuaded her boyfriend Judd Gray to kill her husband Albert – right after she took out an insurance policy with a double indemnity clause. The duo were swiftly apprehended, achieving nationwide fame thanks to a front-page photo that depicted Snyder’s execution. 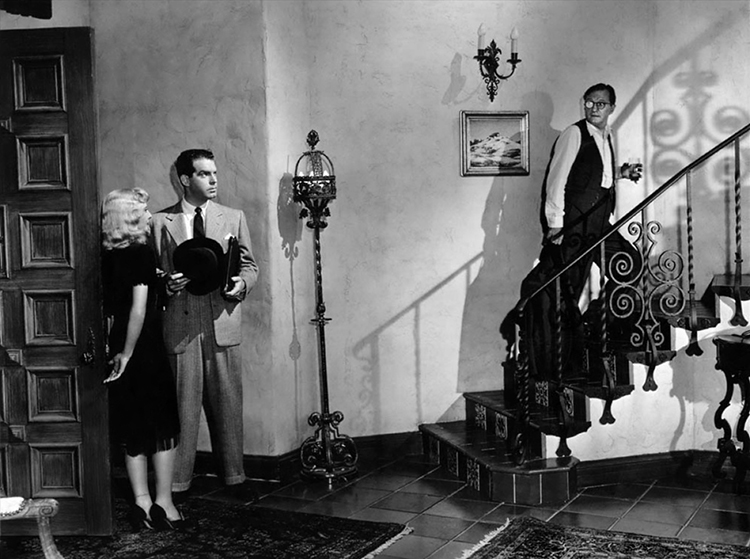 In order for the film to be approved by the Hays Code, Wilder had to make some significant amends to Cain’s novella, most notably the end. By swapping an the concluding execution scene for a double murder in which neither lead enjoys redemption, Wilder managed to prove he wasn’t condoning murder, simply examining possible motivations. What’s surprising is the amount of ‘erotica’ Wilder was able to convey. Stanwyck, who couldn’t just help but be sensual (whatever ‘it’ is, she had it in spades), is alluring from the first swish of her just-in-from-the-sun bath towel. Insurance salesman Walter Neff (Fred MacMurray) is captivated by Dietrichson’s light-catching anklet, that Wilder’s camera introduces through a tracking shot that lingers on her shapely legs as she descends the staircase. It’s a simple but effective introduction – a seemingly innocuous trinket that is anything but, and speaks volumes about Dietrichson’s exoticism and cavalier sensuality. 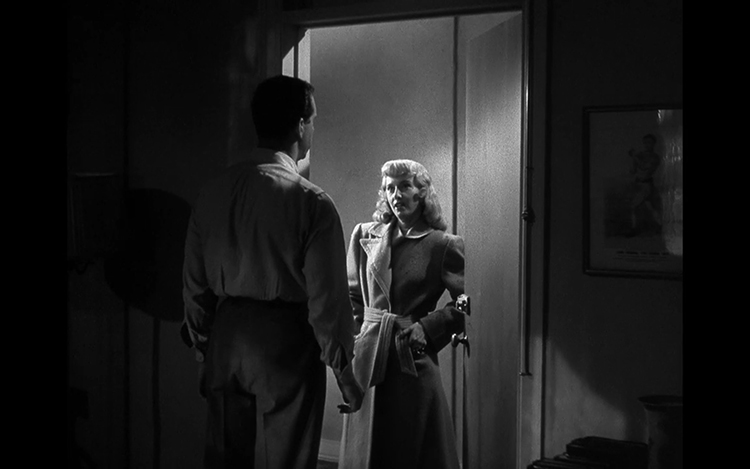 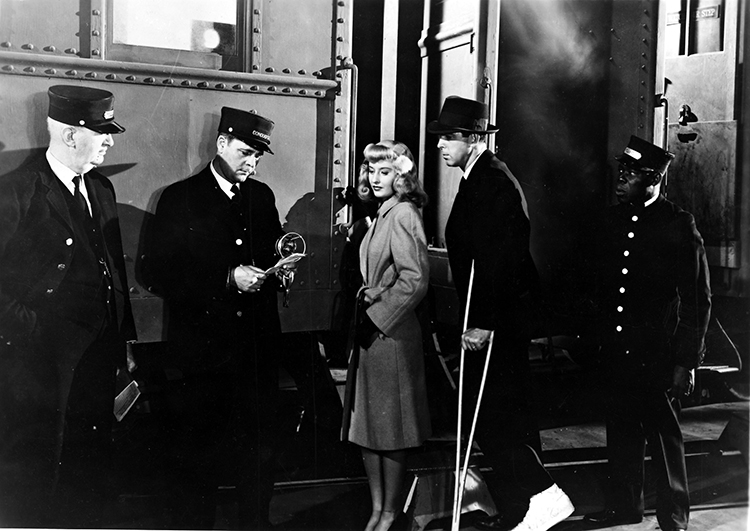 The anklet gets to Neff. “But I kept thinking about Phyllis Dietrichson,” he says in voiceover. “And the way that anklet of hers cut into her leg.” (Note the fetishist element of ‘cut’). It’s meant to get to the audience too – both Neff and the camera shape the audience’s perception of Dietrichson as a lustful object. Both enjoy looking at he; she’s as much object as individual, a trope that’s reinforced by Neff’s repeated (and overuse) of ‘baby’ later on in the film. Yet at the beginning, it’s Dietrichson herself who’s invited this attention; aware of the effect she can have of men, she is a self-constructed fantasy figure. In fact, there’s nothing oppressed about Phyllis. 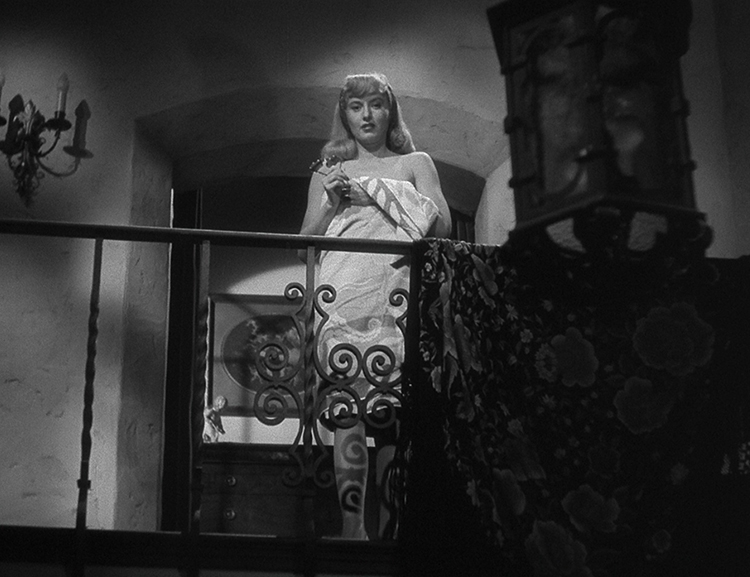 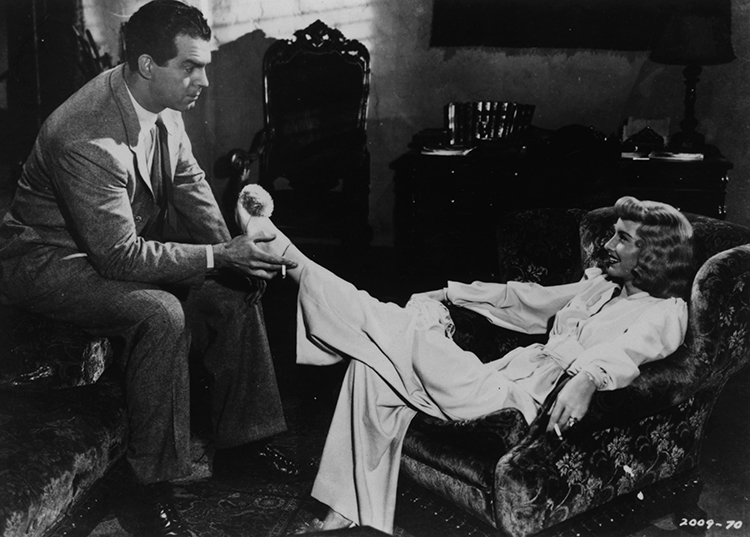 That simple anklet also symbolises Dietrichson’s attitude to her marriage. She describes herself as a ‘caged animal’: “I feel as if he was watching me. Not that he cares, anymore. But he keeps me on a leash so tight I can’t breathe.” Trapped in what she perceives as a loveless marriage and constrained (and bored) by the conventions that society places on wives, her only solution is extreme action. In some ways, Double Indemnity is a critique of marriage – by emphasising that sex and sensuality can’t exist within the safety (and relative dullness) of convention and family, and that sensual women can’t fulfil both personal and society expectations, it brings the entire practice into question. The presence of Lola (Jean Heather) – a child from a previous marriage – only heightens the sense that Dietrichson’s marriage is devoid of sexual desire, and that it’s the woman to blame. Defiant females, unable (or unwilling) to fit their prescribed mould, are forced into extreme acts that will not offer redemption but are punished – in this case by death. 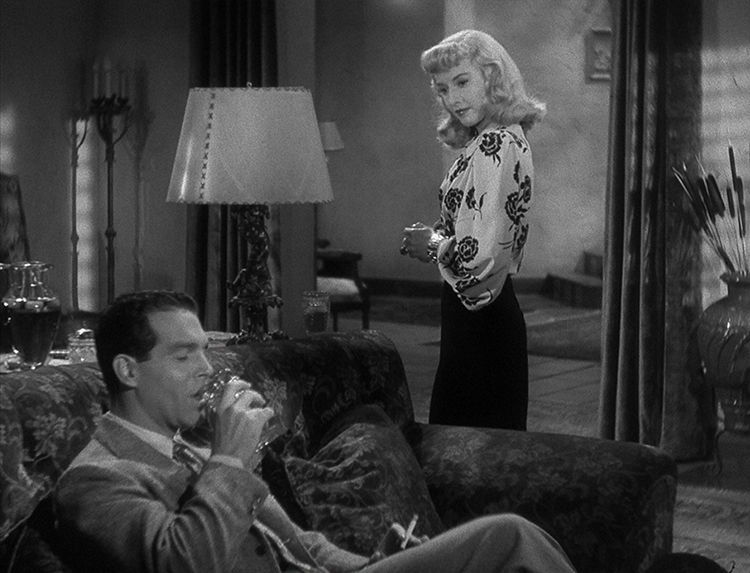 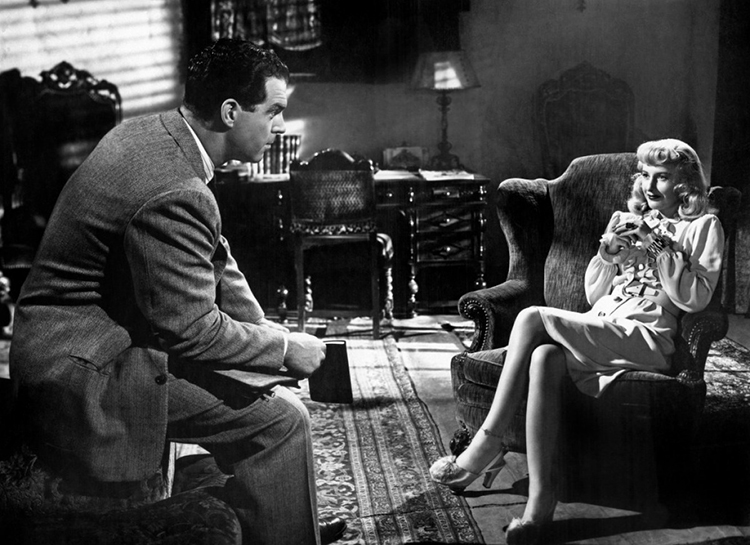 But this perceived lack of sexuality is directly at odds with Dietrichson’s cultivated image. It’s not just the anklet. Everything about her is uniquely sensual, an image created and maintained through considered attire, mannerisms, words and actions. During the final scenes, Lola accuses her stepmother of murdering her father, an accusation based on the fact that she saw Dietrichson modelling a funeral hat in the days leading up to his death. Pretty damming evidence, but to a party unaware of the actual events, it would seem like a natural act for a woman so determined (but unable to) control her perception. 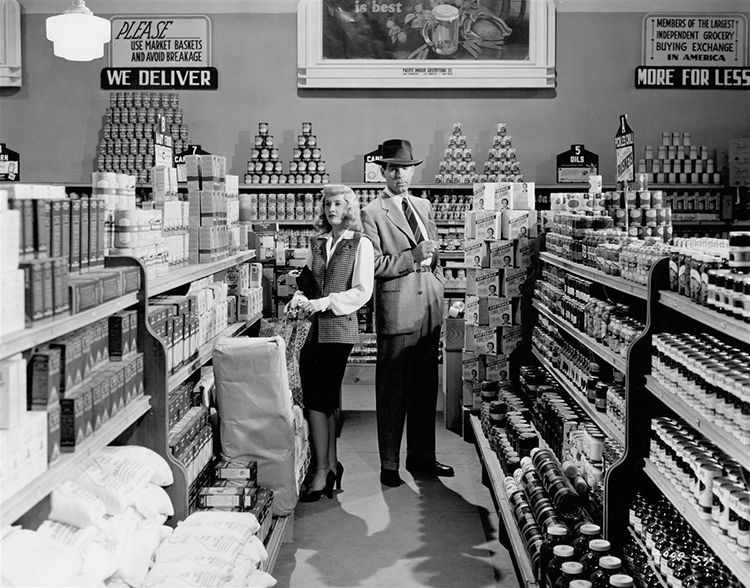 Although the lustful and infatuated Neff concocts the plan to ‘save’ Dietrichson and kill her husband, she certainly plants the seed. Is he blinded by love and greed? Or is he too an opportunist, using Dietrichson in the same way that she’s using him, a mutually beneficial relationship in which both instigators are guilty yet doomed. The traditional view is that he’s simply manipulated into action, yet there’s something in Neff’s manner that doesn’t seem like love – he’s aloof and sometimes cold. The right platitudes and sayings come too easily to be real. Certainly after the murder the relationship changes. Dietrichson is convinced that their relationship is being pulled apart, rather than together, Neff’s ‘shut-up’ kiss is, on the surface, an indication of his love, but in reality it’s just a way to control her. Yet Dietrichson isn’t above manipulation herself. She admits:

No, I never loved you Walter – not you or anybody else. I’m rotten to the heart. I used you, just as you said. That’s all you ever meant to me. Until a minute ago, when I couldn’t fire that second shot.

There’s a lack of genuine feeling between both. In fact, it’s Neff’s relationship with his colleague Barton Keyes (Edward G. Robinson) that’s the humanising element. The relationship might stem from Neff’s fear that Keyes is the only one who can ‘solve’ their perfect murder, but there’s an authenticity to his emotion, real affection and respect, that’s never present in his dealings with Dietrichson. If her aforementioned statement is to be taken at face value, she, in contrast, has no real emotional ties to anyone, surely the very quality that enabled her to murder the first Mrs Dietrichson (or so the audience is led to believe). Roger Ebert suggests the two are simply playing to a style they’ve ‘learned in the movies, and from radio and the detective magazines’; that by deliberately making them one-dimensional pulp characters, Wilder was creating a sardonic comedy in which Dietrichson and Neff play a bad joke on themselves. 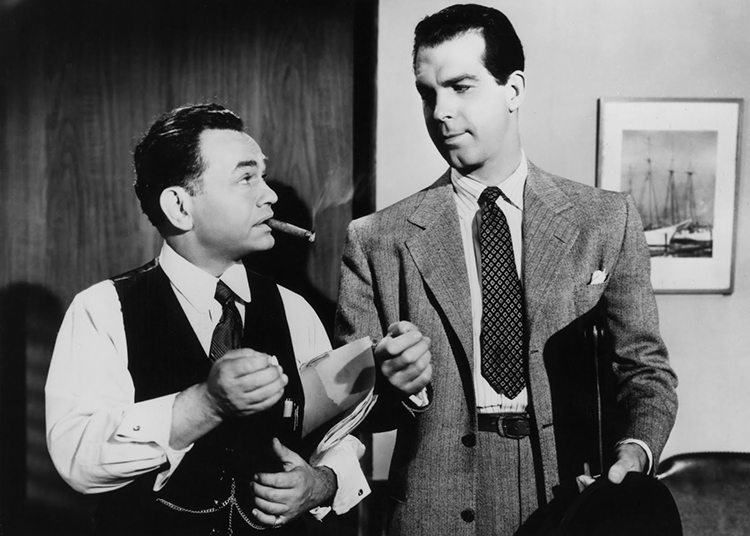 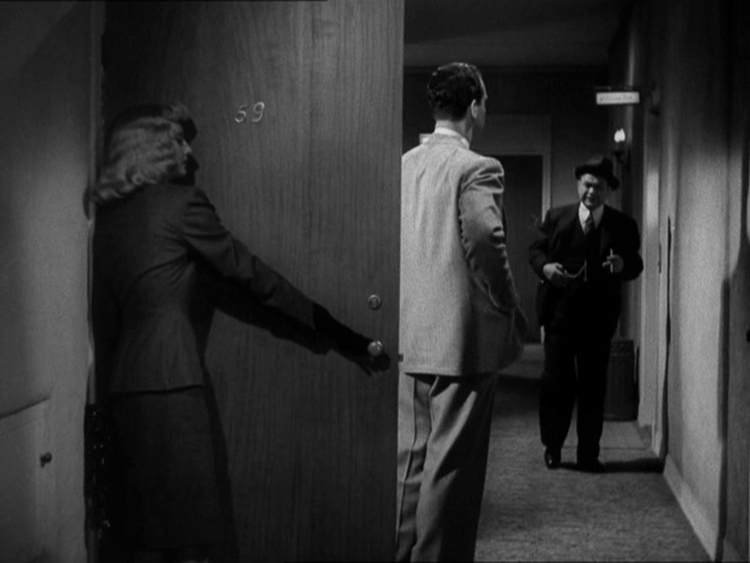 But that’s short-changing both characters. The ‘studied’ aspects are simply another facet of their real-ness. Dietrichson chooses objectification. She understands her position in society and who (or what) she needs to use to improve it. Everything – from the anklet to the blonde coiffure – is deliberate and considered. Neff is knowingly manipulated, happy to be a pawn as he stands to gain too. Yet who is it the audience feels most sympathy for and understanding towards? This is very much Neff’s story – as the narrator he controls the audience’s perception, the pace and takes on the ‘hero’ role through his sentimental and prolonged death scene. By removing the audience from direct (inter)action with Dietrichson it’s impossible to get to ‘know’ her, she remains an enigma, a symbol of fallen womanhood, a moral that crime doesn’t pay. Not giving Dietrichson a chance to fully explain her actions undermines the progressive elements of her character. The truth is that her undoing was the result of trusting – or at least enlisting – the help of a man, and even her death is viewed through the ‘male’ gaze. 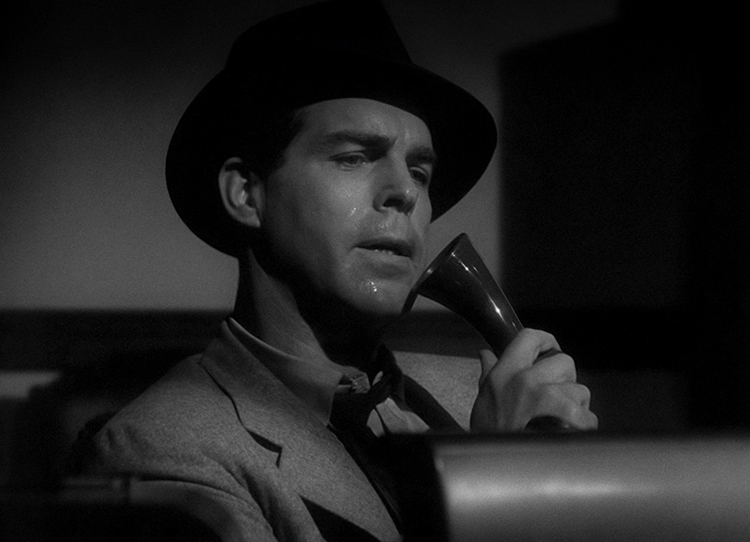 And that’s the reason why Phyllis Dietrichson can’t claim ‘the greatest female character to ever grace the silver screen’ crown. Our perception and interpretation of her is shaped by a man and despite the apparent progressive qualities she displays, her treatment and actions actually uphold tradition and patriarchy. Hollywood had a fascination with ‘strong’ female characters, but only when they could be controlled. After all, movies aren’t meant to incite cultural change… are they?

16 thoughts on “Double Indemnity: the problem with delegating murder to a man”