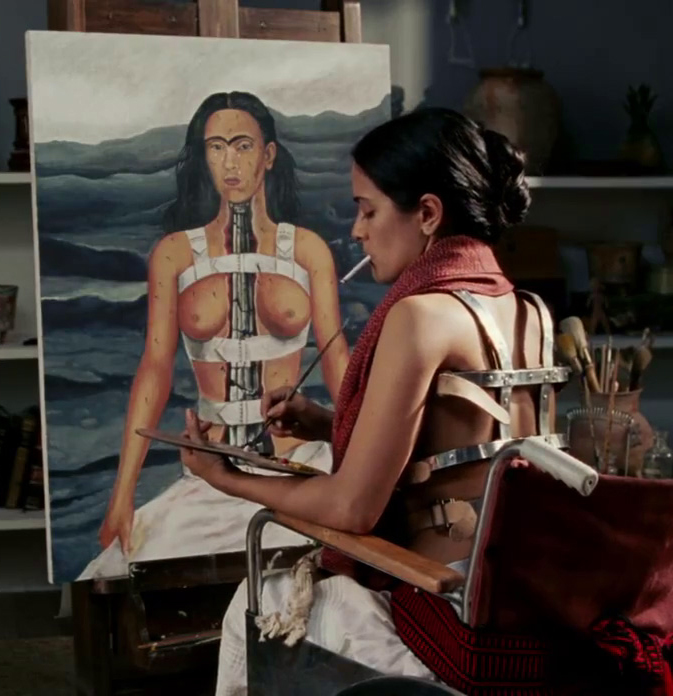 Artist biopics are a notoriously tricky affair. It’s difficult to translate the passions of canvas to the big screen as artistic preoccupations – from wine-drinking to poverty, drama and political leanings – feel easy and formulaic, a film-by-numbers approach to creative genius. Frida, Julie Traymor’s 2002 biopic of Mexican artist Frida Kahlo, wallows in cliché, ticking every expected box. Yet any film about Kahlo has to focus on these elements because passionate arguments, self-reflection, Communism and money worries were her life. 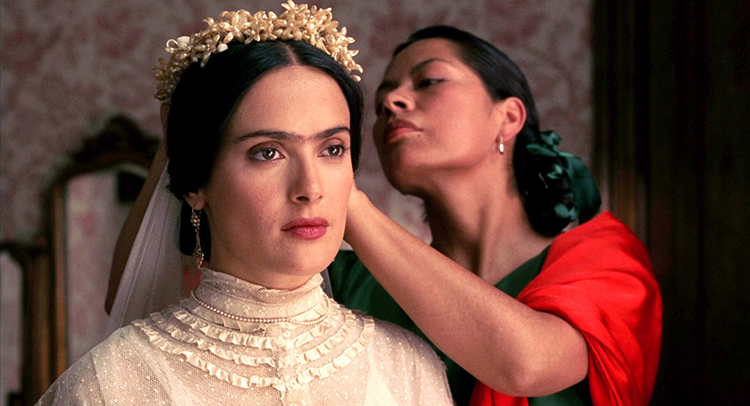 As an artist, Frida Kahlo has become something of a pop culture icon. Her emotions can be read in her diary-like paintings, which are deeply personal and introspective and drew almost obsessively on her own life. But they also represent wider issues: her politics and thoughts on national identity, Mexico’s relationship with the US. Traymor attempts to pack that into 123 minutes by looking beyond the icon and the imagery to focus on the real person. She’s partially successful. The fast pace of the film’s events mirror life as it must’ve been to Kahlo, who died when she was just 47 years old. Animated scenes draw from Mexican folklore (as Kahlo’s paintings did) and bring the artist’s paintings to life, emphasising the connection between art and life.

In many ways, Traymor’s Frida is a love-story, yet it’s not a conventional set piece. When Frida (played by Salma Hayek) and muralist Diego Rivera (Alfred Molina) marry, she asks that if he can’t be faithful, he at least is loyal. She accepts his philandering; fidelity is a bourgeois norm that they – as bohemians – rejects. Yet his transgressions sting, and she responds in the best way she can: revenge. Her lovers include Josephine Baker and, later, Leon Trotsky. It’s a tale of double standards – neither forgives the other for transgressions they have themselves made. For Frida, the final straw is when Diego sleeps with her sister.

During her lifetime, Frida once said that there were two accidents in her life – a trolley car accident that almost killed her, and Diego. The crash, which happened when Frida was a young student, shattered her back and pierced her body with a steel rod (in her words: “the handrail pierced me as the sword pierces the bull”). Although she narrowly avoided death, she was never free from the pain. But as with Diego, disaster proved to be inspiring. Frida’s first drawings decorated her full-body cast, later she painted portraits whilst sitting up in bed. From the very beginning, art was a way to escape the pain, to make sense of confusion and chaos. In a sense, that’s what she did for the rest of her life. Most of her compositions are an expression of self, but also an expression of life – proof that she is indeed alive. 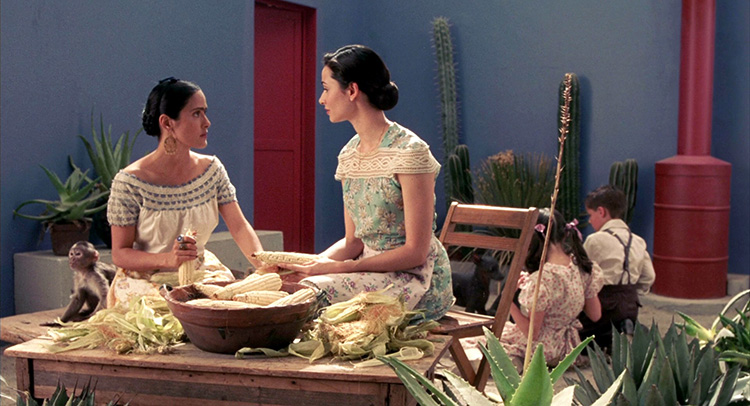 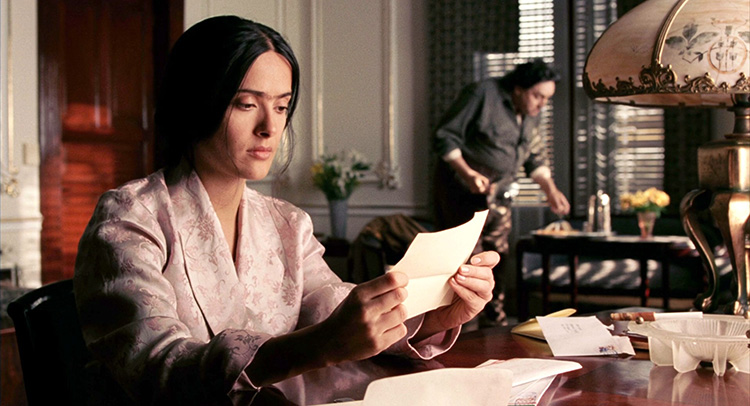 Of course, no film about Frida Kahlo can ignore the aspects of the artist that have cemented her in popular culture: her distinctive monobrow, her preference for traditional Mexican dress, her bisexuality. Kahlo is a template for bohemian behaviour, but she didn’t just live bohemia to make a statement – it was who she was. Yet whilst these all appear in the film, they’re never overplayed. For example, for her sister’s formal family wedding photo Frida opts to wear a grey mans suit, complete with a waistcoat and tie. As she pauses in the garden to cut a rose for her button-hole, her mother purses her lips but makes no comment. Individuality and self-expression is the fuel that sustains her, she’s not in it for the publicity. Similarly, her bisexuality. On some level it’s a reaction to Diego, but really it’s just another form of self-expression.

A riot of colour and music, Frida works best when it strays away from convention and formula and incorporates art and animation into storytelling. The bus accident is depicted through a hyper-real montage that sees Frida covered with gold dust (apparently that actually happened, a fellow commuter was carrying a cup) and later, in the hospital, her surgery is imagined through a macabre stop-motion animation, filled with skeletons inspired by Mexico’s Day of the Dead tradition. 1930s New York is depicted in the style of a Dadist collage, during a trip to the city Frida watches Cooper and Ernest Scheodsack’s King Kong. Later she imagines the bear-like Diego climbing the Empire State Building before turning into a giant who captures her with in his oversized fist. In the film’s closing scene, Frida’s four-poster bed floats away into a blue sky. Death (in the form of a skeleton and a large vulture-like bird) resides on its canopy, illuminated by crackling sparklers.

In spite of all the self-portraits, we never know exactly who Frida Kahlo was. In Frida Traymor and Hayek take the sentimental approach, but ‘reading’ Kahlo based solely on her paintings is problematic. She used art to reveal her personality but also to construct it. She mixed reality and fantasy (Surrealism and folklore) in her compositions, but also when creating her own image, blending what was real with what she wanted to be true. Ultimately, over-reliance on Kahlo as narrator of her own life means Hayek’s performance captures Frida as we think we know her, but fails to uncover anything new about an artist that was so much more than the canvas.

This post is part of the Hispanic Heritage blogathon, hosted by Once Upon a Screen. Read all the entries and join in the celebration here!