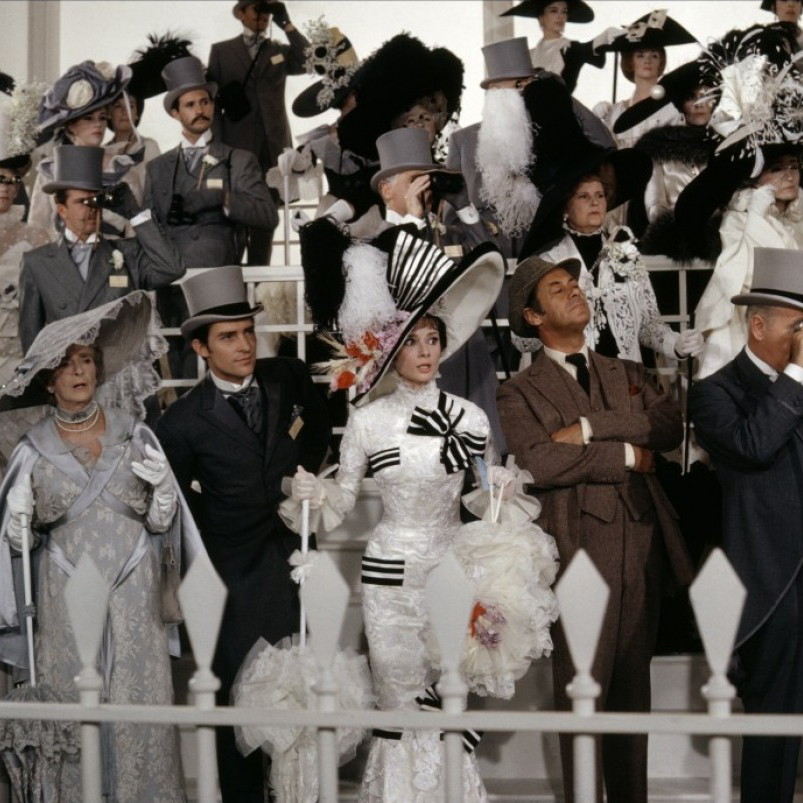 You can’t, the cliché goes, choose who you fall in love with. Perhaps the same holds true for classic movie comfort blankets, the films you watch when the world is grey and nothing goes right. At least, I hope it does, because how else to explain my penchant for George Cukor’s My Fair Lady, a film feel-good tale of transformation that comes with a healthy dose of sexism. Eliza Doolittle’s (played by Audrey Hepburn) metamorphosis from Cockney flower seller to high-society lady simultaneously comments on the class system in Britain whilst reinforcing patriarchy and gender roles.

Of course, My Fair Lady sits firmly in the ‘musical’ genre. Its very purpose – from the floral-filled overture to the romantic closing scene – is to delight and enthral. Visually, in terms of costume and set, it’s seductive. Art director Cecil Beaton and cinematographer Harry Stradling went all out of the stylized studio sets, made all the more the beautiful because of the lack of authentic realism. Covent Garden flower market is a riot of colour and blooms, Henry Higgins’ (Rex Harrison) book-lined library is filled with countless artefacts and oddities, Mrs Higgins’ (Gladys Cooper) conservatory is the epitome of elegance. And of course, the stylized Ascot scene is a monochrome triumph in an otherwise sumptuous production. Although all of Eliza Doolittle’s costumes are wonderful, it’s the white lace floor-sweeping dress, detailed with black and white stripes and bows and topped with a wide-brimmed, feather-bedecked hat, which sticks in the memory.

The musical numbers are wonderfully buoyant, although often overshadowed by the fact that Audrey Hepburn ‘didn’t do her own singing’. Much was made of the fact that her musical lines were dubbed by Marni Nixon, especially after Hepburn was chosen for the role over Julie Andrews, who had played Eliza Doolittle alongside Rex Harrison in a West End stage production. Much was made of Hepburn’s poor lip-syncing and limited vocal range; in the actresses’ defence many other famous roles (including Deborah Kerr in The King and I and Natalie Wood in West Side Story) also received the Nixon treatment. As Roger Ebert observes, ‘that Hepburn did not do her own singing obscures her triumph, which is that she did her own acting’. Apparently that wasn’t enough for the Academy – even though the film won eight actors, including Best Picture, Best Director and Best Actor – Hepburn didn’t receive a nomination for her efforts. In a cruel twist of irony, the Best Actress gong went to none other than Julie Andrews for her role in Mary Poppins.

What the Academy failed to notice was that Hepburn’s portrayal of Doolittle was passionate, sensitive and moving. The ease with which she was able to play the character might well have been her undoing – anyone who was so comfortable as a raggedy flower seller with a dirt-smudged cheek surely didn’t need to be rewarded for their efforts. That the film remains watchable and relevant is in part thanks to Hepburn’s performance, but also the witty script that’s a cut above musical standards. Based on George Bernard Shaw’s 1912 play Pygmalion, itself a riff on Ovid’s Metamorphosis (mostly the part when a sculptor named Pygmalion falls in love with his statue of the perfect woman) it has an acerbic wit and a theoretical undertones.

Yet despite the sets and the costumes, the musical numbers and the witty script, I’d never been able to get over the fact that My Fair Lady is, in a nutshell, a story about a male ‘genius’ transforming a young woman from a waif to a duchess, and getting most of the credit for her hard work in the process. But that’s an oversimplified version of the truth. Henry Higgins might be deeply misogynistic (choice lines include: ‘Why can’t a woman be more like a man?’ and ‘you squashed cabbage leaf, you disgrace to the noble architecture of these columns, you incarnate insult to the English language’) but his disrespect doesn’t only extend to Eliza. He also has some less than complimentary things to say about (in no particular order) Americans, the French, women in general, Eliza’s father Alfred, and Freddy, an interested suitor. As is so often the case with musicals, his meanness is an exaggerated characteristic, played up for theatrical purposes. As Higgins himself observes to Eliza: ‘The question is not whether I’ve treated you rudely, but whether you’ve ever heard me treat anyone else better’. It’s a fair point. 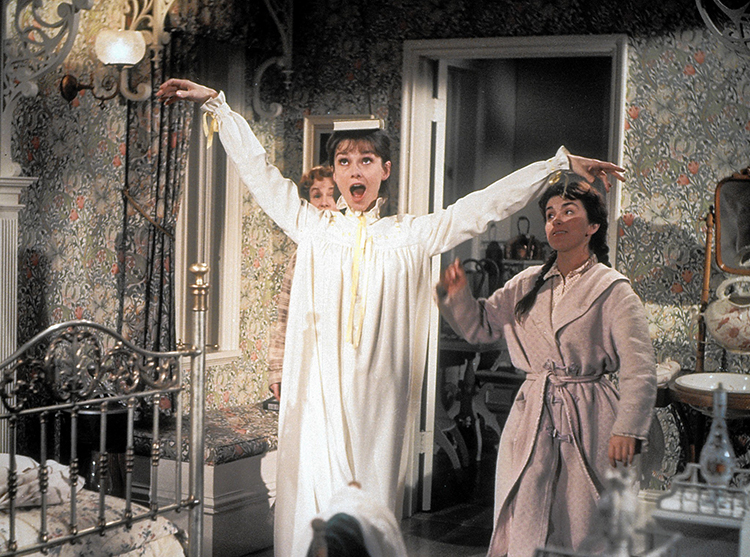 As for the transformation story, it’s actually Eliza that presents herself at Higgins’ house, ready to sign up for lessons (‘I know what lessons cost as well as you do, and I’m ready to pay’). The contest – to pass her off as a duchess at an Embassy ball – is born from Higgins and Colonel Pickering’s (Wilfrid Hyde-White) competitive banter, a stereotypical one-upmanship that sees Pickering pledge to pay for all the expenses should Higgins succeed. Although Eliza is present during the decision, hampered by the intellectual capabilities of her class she is unable to participate in the discussion about her own future. In short, she might be the initiator of her own transformation, but when she becomes a short-term, amusing vanity project, autonomy is taken from her. What’s important though is that Higgins’ response to Pickering’s challenge (‘She’s so deliciously low. So horribly dirty’) frames the rest of the film. Higgins might teach Eliza how to talk ‘like a lady’ but she teaches him humility, respect and decency – even if it takes him a while to realise it.

My Fair Lady might not be a feminist film that subverts gender norms, but it does have something revolutionary to say about class. The ‘happy’ ending only comes after Eliza forces the obnoxious Higgins to see that, although she’s cultivated an air of superiority, it means very little because he can’t treat her as anything but a common flower girl. Perhaps it’s a stretch to say that it paved the way for feminism in the 1960s, but it certainly raised issues about entitlement as a birthright, rather than something that can be earned. Well that’s one way to make me feel better about my classic movie comfort blanket!

This post is part of the Classic Movie Ice Cream Social, hosted by the wonderful Movies Silently. So grab yourself a big bowl of whatever-floats-your-boat and get reading!

12 thoughts on “My Fair Lady: a bloomin’ loverly musical”