Joan Crawford’s legacy is inextricably bound up in the shoulder pad. What began as an identifying trademark, a way for audiences to attach themselves to the actress rather than the character (and in the process ensuring higher box office returns) became a standard in-joke after the actress appeared in a string of unsuccessful movies. When Jack Warner, producer and the then head of Warner Bros. suggested Crawford for the lead role in Mildred Pierce, director Michael Curtiz reportedly exploded: “She comes over here with her high-hat airs and her goddamn shoulder pads…why should I waste my time directing a has-been?”. He forced Crawford to take a screen-test, surely a humiliating experience for an actress who had enjoyed two decades at MGM.

Despite Curtiz’s initial reservations, this was one of Crawford’s strongest (and an Oscar-worthy) roles, perhaps because the character aligns so strongly with the ‘Joan Crawford’ story – or at least the Crawford story her publicists promoted. Mildred Pierce is a housewife who transforms herself into a successful entrepreneur with a string of restaurants after her husband Bert (Bruce Bennett) has an affair. She is driven by her desire to give her spoilt daughter Veda (Ann Blyth) everything she deserves in life, but Veda looks down on her mother’s business and manipulates her affections – even encouraging her to marry for money, not love. Mildred is seemingly blind to her daughter’s shortfalls, and fails to heed the warnings issued by her best friend Ida (Eve Arden). That’s until she finds her daughter in a clinch with (second) husband Monty (Zachary Scott).

Mildred Pierce is based on the 1941 novel by James M. Cain, who also wrote Double Indemnity (1944) and The Postman Always Rings Twice (1946). Although the film adaptation differs quite significantly from the Cain original, the film is still widely regarded as a film noir classic. Told in a flashback style, the narrative fluctuates between male and female voices – the present action is controlled by Inspector Peterson, whilst the flashback scenes are told in Mildred’s voice. As a result, Mildred Pierce is a mix of melodrama and noir, all bathed in Ernest Haller’s black and white cinematography.

It’s often reported that Crawford underwent a ‘de-glamorising’ process for the role. She certainly felt like she did, at the time complaining to a journalist that she looked ‘crummy’ without Adrian, her favoured costume designer and the creator of the Crawford image. In fact, Mildred Pierce is a much a deconstruction of the all the actress’ parts as it is the creation of a character. The opening scene is pure Crawford, and show Mildred Pierce at her most glamorous. Her lavish fur coat (complete with shoulder pads), worn over an embellished dress and accessorised with a fur hat and gloves, the ultimate status symbol. But the flashback narrative quickly establishes that she’s a self-made woman who rose from more humble origins. 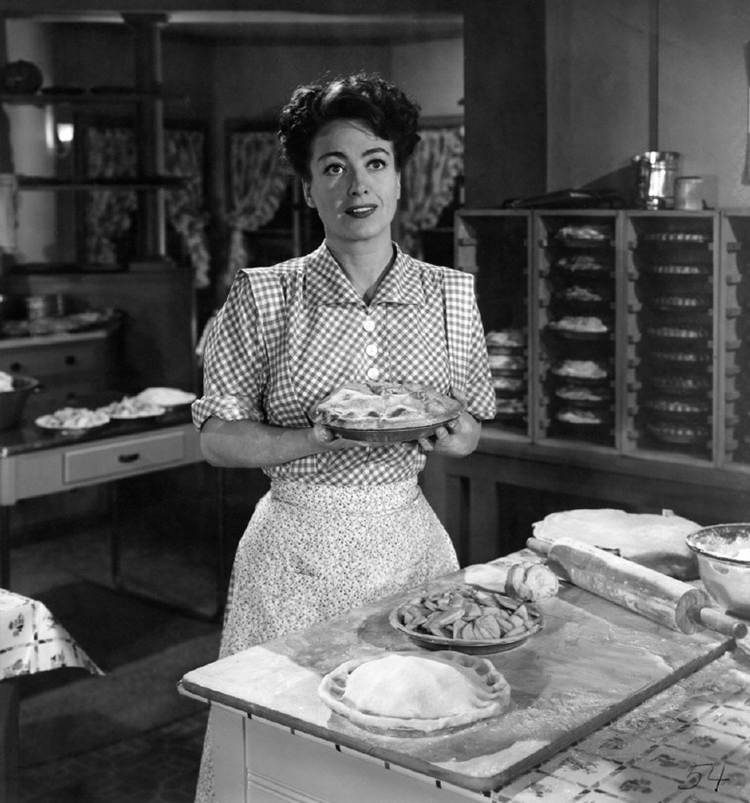 As a housewife, and much to Veda’s dismay, Mildred bakes cakes for the neighbours to supplement the family’s income. She wears practical striped blouses, skirts and shirt-waist dresses in homely gingham prints. Her sleeves are rolled up, and she favours a floral print apron. Apparently even these clothes were a battle. According to Crawford:

“For my early scenes, the studio designed some cotton frocks. Mr Curtiz said no, they looked too smart. I went down to Sears Roebuck and bought the kind of housedresses I thought Mildred would wear. When I arrived on the set for the wardrobe tests, Mr Curtiz walked over to me shouting, ‘You and your damned Adrian shoulder pads. This stinks!’ And he ripped the dress from neck to hem. ‘Mr Curtiz,’ I sobbed, ‘I bought this dress this morning for two dollars and ninety-eight cents – there are no shoulder pads,’ and I rushed to my dressing room in tears. We had no more arguments about clothes.”

Pity costume designer Milo Anderson, who must have been caught between a director determined to remove all references to ‘Joan Crawford’ and an actress who wanted to maintain some semblance of glamour.

Veda displays her snobbery through her attitudes towards her mother’s wardrobe. She hates Mildred’s waitress uniform because it highlights their working class origins and she forces the family maid Lottie (played by butterfly McQueen) to wear it because (in Veda’s eyes at least), Lottie is the rightful owner. Mildred’s uniform ties her to her profession. Her checkered collars match the tablecloths and, even on the opening night of her first restaurant she wears an apron over her black suit. Even when Mildred first meets Monty she doesn’t dress to impress. The first time she visits his beach house she wears a long-sleeved polka dot day dress, then borrows a two-piece bathing costume from his sister’s wardrobe. 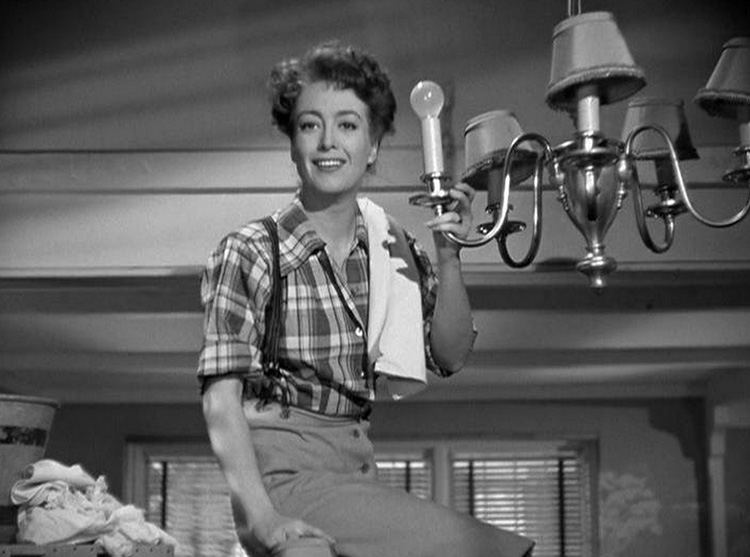 The only real concession to her allure comes when she’s preparing the decor of her first restaurant. Mildred’s shapely legs, emerging from a button-through pencil skirt and finished with peep-toe pumps, unsurprisingly attract Monty’s gaze, and remind the audience that, although Mildred might be on her way to a becoming a success story, she’s still a woman, and will always be judged by her appearance. And let’s not overlook the fact that this is probably not the most practical outfit in which to clean a light fixture, there are certain standards expected from a Hollywood star.

Mildred’s success is visually apparent. As befits her ‘businesswoman’ status her image becomes increasingly masculine, and structured suits, in pinstripe or a mid-weight grey wool, become Mildred’s outfits of choice. Curtiz did allow some ‘strong’ shoulders to slip through, and although they’re not up to Adrian’s standard, they certainly allow Crawford to cut a more authoritative figure in a male dominated world. Mildred’s masculine qualities become more apparent following her marriage to Monty, whose dapper nonchalance and well-placed pocket squares are at odds with her sartorial formality. Their disparate styles only distance Mildred even further from Veda, who is completely enamoured with her mother’s husband and everything he represents.

Mildred Pierce is a complex feminist character. She enjoys success – albeit in a domestic profession – in a ‘mans’ world, but it’s to the detriment of her happiness. The death of her youngest daughter Kay is her punishment for daring to pursue interests and have aspirations outside the nuclear family. During her second marriage, which is marred by unhappiness and a deepening rift with Veda, Monte squanders her money (and indeed her business) and Mildred is forced to give it up. The movie’s release date was actually postponed to coincide with the return of American GIs from WWII, as its producers felt it would boost post-war morale.

During the war, women had taken over traditionally ‘male’ roles and Mildred Pierce was a stark, moralising tale, warning about the dangers of working mothers. Crawford’s character is a symbol of the supposedly ‘bad’ things that might befall women who eschew the domestic sphere in favour of the workplace. In the 1940s especially, there was growing anxieties about the impact working mothers had on their psychological development of their children, but the movie strongly infers that Veda’s manipulative and snobby qualities were present before Mildred took on a ‘working’ role and were not created, only exacerbated by it.

It’s the combination of film noir and female melodrama that make Mildred Pierce so successful. By incorporating the two, Curtiz was able to explore issues around gender roles and identity much more than if he had chosen just one genre. Noir themes – from femme fatales to greed, love and betrayal – are used as starting points for wider discussions about women’s roles in the workplace, and in society at large, all wrapped up in de-glamorised Joan Crawford who finds shoulder pads are the way to try and fake it in a man’s world.