A slightly slower-paced screwball than Bringing Up Baby and His Girl Friday, Ball of Fire is, nevertheless, a thoroughly enjoyable wisecracking movie. Many of the elements that make a classic Howard Hawks film might be somewhat diluted, but the dialogue and comic timing of the lead actors is perfectly pitched. Playing a professor and a nightclub singer respectively, Gary Cooper and Barbara Stanwyck deliver sassy one-liners with aplomb, even if their on-screen chemistry doesn’t quite pass muster.

Those sharp one-liners came courtesy of Billy Wilder – working in collaboration with Charles Brackett, Ball of Fire marked Wilder’s last foray into screenplay-only films. After completing this movie he moved into a writer-director role (and provided us with classics including Double Indemnity and Sunset Boulevard). Wilder took the Ball of Fire gig with the condition that he’d get unlimited access to visit the set to observe Hawks at work – although reports suggest he was unimpressed with the final version.

The story, a take on Snow White and the Seven Dwarves, revolves around a group of professors who are working on an encyclopaedia. They live and work together in a somewhat claustrophobic house, with little interaction with the outside world – until Professor Bertram Potts (Cooper) goes on a field experiment whilst researching American slang. During his jaunt into the real world he meets Sugarpuss O’Shea (Stanwyck) and is captivated by her performance of ‘Congo Boogie’. He invites Sugarpuss to participate in a round-table discussion the following day, and is surprised when she turns up on his doorstep later that night after she initially refused to participate. She’s decided that the professors are the perfect cover for a woman who’s avoiding the police, and brazenly invites herself in. The adventure that follows is predictable but also charming, and a wonderful fusion of intellect and physical impulses.

Ball of Fire is one of the few Hawks films that lends a level of heroism to intellectual characters. Most of the director’s other films deal with ‘active’ professions (think pilots, race-car drivers and cowboys) rather than men of science and learning. Here we have not just one but eight of them (indeed the gravitas that Hawks needed to give the characters for them to be convincing probably contributed to the film’s slow pacing), each one incapable of understanding women, much less being able to negotiate *whispers* sex. The widowed Professor Oddly, shy and timid, describes how his treatment of his own wife: “I kissed her hand each night, astonished at my own boldness”. This childish and simplistic view of relationships is really absurd but as Robin Wood notes in Howard Hawks, when viewed as a collective their actions take on a certain dignity.

Alongside Wilder’s script, the film’s highlight is Stanwyck. Interestingly, both Ginger Rogers and Carole Lombard turned down the role, and Hawks considered other actresses (including Betty Field and Lucille Ball) before deciding on Stanwyck. In truth, she was the perfect choice for the role, able to convey a combination of sass and tenderness. Even when she treats Potts badly, the audience is always on her side. It helps, of course, that Stanwyck looks the part too – her wonderful costumes were designed by long-term collaborator and friend Edith Head, who knew exactly how to fix the actress’ figure ‘flaws’ (the main problem was a long waist). Head first dressed Stanwyck for Internes Can’t Take Money (Alfred Santell, 1937) – when Stanwyck told Head that she couldn’t wear fancy clothes, the designer replied, “Of course you can wear them.” From then until the ’50s, Head dressed Stanwyck almost exclusively, following her from studio to studio. She also designed many outfits for the star’s public appearances. Although Ball of Fire only required five costume changes, each look adds depth and meaning to Sugarpuss, keeping the audience guessing about ‘who’ she really is. Which one is your favourite?

Look one: show-off sequin stripes
Stanwyck’s opening outfit is as showy as her stage routine. The glittering, sequin dress included a striped bustier with chiffon sleeves and a cut-out waist and a fringed skirt – both details designed to emphasise Stanwyck’s assets (legs and waist). A typical nightclub singer she’s as dazzling as the sequin she wears – everyone’s eyes are on her, except for Bertram Potts, who’s absorbed in his notebook, desperate to catch every example of slang he can. They are quite simply from different worlds – a comparison that’s drawn through their contrasting costumes but also through his awkward behaviour. This isn’t Potts’ natural habitat – and he isn’t much more comfortable backstage, where his close proximity to Sugarpuss ties his tongue in knots. Sugarpuss’ outdoor wear (a large fur coat and a chiffon headscarf) is suitably glamorous, but the professors aren’t prepared for the barely-there garment that’s underneath, or for her to peel off her stocking. She’s using every trick in her not insignificant arsenal, and they’ve fallen hook, line and sinker.

Look two : butter wouldn’t melt
A simple, demure and ladylike outfit that’s the polar opposite to the opening number. There’s a schoolgirl charm to the elegant blouse (complete with a monogrammed sleeve) and softly pleated skirt with a wide striped waistband but, ever the ingenue, Sugarpuss manages to inject some sass and scandal. She brazenly asks the professors to help her with the outfit’s zipper, causing much consternation amongst the collective. Her vivacious flirting (surely a quality only Stanwyck could bring to the role) by turns charms and flummoxes them, and housekeeper Miss Bragg is mightily vexed. 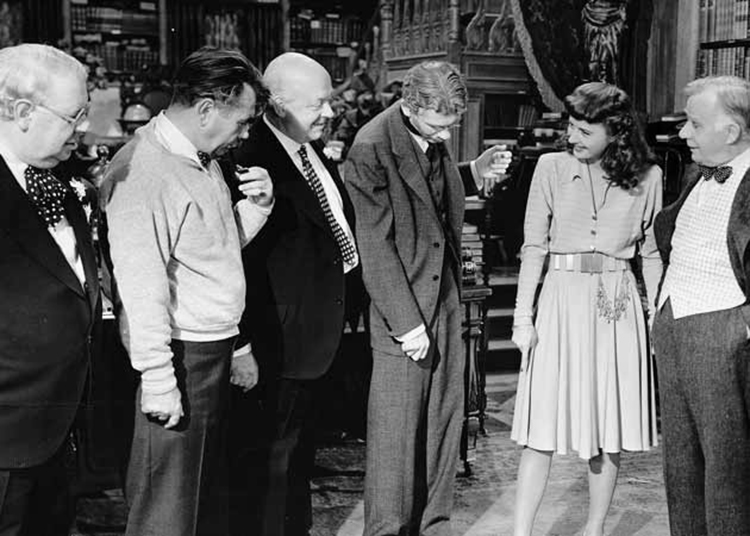 Look three: casual daywear, O’Shea style
This outfit is very similar to the previous ensemble: a fluid-fitting blouse paired with a pleated skirt, cinched at the waist. This time the stripes appear on the blouse and the  belt has metallic loops and a looped chain. Whether Head was dressing Stanwyck up or down, she always knew how to make the most of her figure. It probably helped that Head and Stanwyck were good friends. The designer successfully turned the ‘plain Jane’ actress into a sex symbol for The Lady Eve (Preston Sturges, 1941), Head employed a few costume tricks to improve Stanwyck’s naturally trim figure (namely widening the waistbands at the front and narrowing them at the back) and the public saw the actress in a whole new light. The Lady Eve bought the designer the acclaim that had eluded her since she took over from Paramount’s legendary head designer Travis Banton in 1938. In Edith Head’s Hollywood, Stanwyck recalls that: ‘From then on I had Edith Head’s name written into every contract, no matter what studio I was working for’. 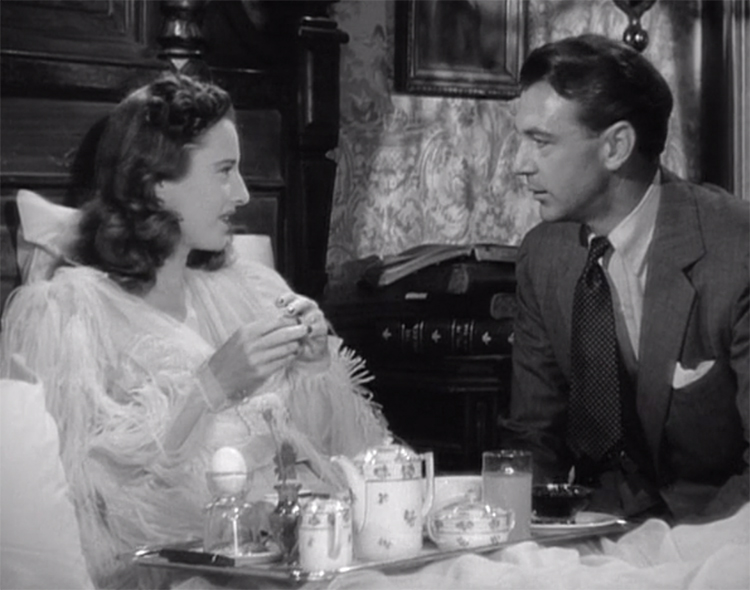 Look three: what, this old thing?
Flouncy marabou feather sleeves, a full length skirt with a trailing chiffon train: they don’t make nightgowns like this any more (or if they do, no-one I know is wearing them). This outfit is a return to form for Sugarpuss, but it’s not showy for showiness sake – Edith Head was more talented than that. This gown is about emphasising contrast, about bringing ambiguities to a character and making us question our assumptions. There’s the obvious contrast between Sugarpuss’ flamboyant gown and the stuffy professor’s house, between her extravagant attire and Pottsie’s sensible (and well worn) threads. Yet other distinctions – the innocent simplicity of her pulled back hair versus the vamp nightgown; the tenderness with which she places the humble but thoughtful ring Pottsie uses to propose on her finger versus the greedy delight with which she had previously received Joe Lilac’s token – suggest that Sugarpuss might not be the gal we’ve pegged her as. That the glamorous facade might conceal a sensitive core, that her good conscience will tussle with her material desires… But then she’s punches Miss Bragg and locks her in the cupboard and harmony is restored. Pottsie deserves so much better! Sugarpuss’ long, shapely legs have adled his brain.

Look four:
Fitting her fluctuating emotions, Sugarpuss’ final look can dressed up or down. In the car on the way to New Jersey, the day dress is accessorised with a dramatic veiled hat, a fur stole and embellished cuffs (probably bangles) but, as she comes to accept her feelings for ‘Pottsie’, she loses the fripperies until the dress is simply adorned (at least by Sugarpusses’ standards). This is actually to be her wedding dress – despite the urgency of the ceremony surely Sugarpuss would’ve insisted on something more glam. Whether she wants to admit it or not, she’s already given her heart to someone else (hint: he’s name isn’t Lilac).

This post is part of the Remembering Barbara Stanwyck blogathon, hosted by the wonderful In The Good Old Days Of Classic Hollywood to honour the 26th anniversary of the actresses’ death. Check out all the other posts here, and let’s celebrate the career of one of Hollywood’s most versatile actresses!

27 thoughts on “Ball of Fire: Barbara Stanwck as Sugarpuss O’Shea”